This post from www.BaltimoreTown.org is testing out our email subscriptions.
Thank you for your interest in and support of the Baltimore Town archiving project.

The first printing press was introduced to the city in 1765 by Nicholas Hasselbach, whose equipment was later used in the printing of Baltimore’s first newspapers, The Maryland Journal and The Baltimore Advertiser, first published by William Goddard in 1773.[40][41][42]

Baltimore grew swiftly in the 18th century, its plantations producing grain and tobacco for sugar-producing colonies in the Caribbean. The profit from sugar encouraged the cultivation of cane in the Caribbean and the importation of food by planters there.[43] Since Baltimore was the county seat, a courthouse was built in 1768 to serve both the city and county. Its square was a center of community meetings and discussions.

Baltimore established its public market system in 1763.[44] Lexington Market, founded in 1782, is known as one of the oldest continuously operating public markets in the United States today.[45] Lexington Market was also a center of slave trading. Enslaved Blacks were sold at numerous sites through the downtown area, with sales advertised in The Baltimore Sun.[46] Both tobacco and sugar cane were labor-intensive crops.

In 1774 Baltimore established the first post office system in what became the United States,[47] and the first water company chartered in the newly independent nation (Baltimore Water Company, 1792).[48][49]

Baltimore played a key part in the American Revolution. City leaders such as Jonathan Plowman Jr. led many residents to resist British taxes, and merchants signed agreements refusing to trade with Britain.[50] The Second Continental Congress met in the Henry Fite House from December 1776 to February 1777, effectively making the city the capital of the United States during this period.[51]

The towns of Baltimore, Jonestown, and Fells Point were incorporated as the City of Baltimore in 1796–1797. The city remained a part of surrounding Baltimore County and continued to serve as its county seat from 1768 to 1851, after which it became an independent city.[52]

Bombardment of Fort McHenry by the British. Engraved by John Bower[53]

The Battle of Baltimore against the British in 1814 inspired the U.S. national anthem, “The Star-Spangled Banner“, and the construction of the Battle Monument which became the city’s official emblem. A distinctive local culture started to take shape, and a unique skyline peppered with churches and monuments developed. Baltimore acquired its moniker “The Monumental City” after an 1827 visit to Baltimore by President John Quincy Adams. At an evening function, Adams gave the following toast: “Baltimore: the Monumental City—May the days of her safety be as prosperous and happy, as the days of her dangers have been trying and triumphant.”[54][55] 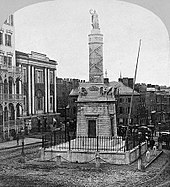 The Battle Monument is the official emblem of the City of Baltimore.

Baltimore pioneered the use of gas lighting in 1816, and its population grew rapidly in the following decades, with concomitant development of culture and infrastructure. The construction of the federally funded National Road (which later became part of U.S. Route 40) and the private Baltimore and Ohio Railroad (B. & O.) made Baltimore a major shipping and manufacturing center by linking the city with major markets in the Midwest. By 1820 its population had reached 60,000, and its economy had shifted from its base in tobacco plantations to sawmilling, shipbuilding, and textile production. These industries benefited from war but successfully shifted into infrastructure development during peacetime.[56]

The Internet Archive website is a free digital library of over 50 million items — photos, texts, videos and audio recordings, 'shelved' in many thousands of member-curated collections. Here we list a few of those collections that may be of interest to folks in Baltimore Town.